I should write a better entry and post better photos, but I needed a shark, and I am limp with laughter and somewhat dizzy from Sharknado 2: The Second One, which in fact is even more hilarious than the first (we watched the rerun of that too beforehand). The special effects in the sequel are not quite as godawful, which was part of the charm of the original, but the number of cameos and terrible homages to classic science fiction more than make up for it -- I don't want to spoil anyone who hasn't seen it but everything from The Twilight Zone to Star Wars to Airplane ends up in there.

Is there any point in mentioning the science? Not unless you're playing a drinking game, though if you drink every time something unrealistic happens, you'll be unconscious before the first hour is over. And as terrible as most of the acting is, let alone the dialogue, the female characters are no sillier than the men (in several cases they're much better problem-solvers), and both Sharknado films pass the Bechdel Test, which I hope makes Joss Whedon and The Avengers feel ashamed. Also, the Rob Lowe Shark Week jumping-the-shark commercial is a thing of beauty. From National Aquarium's Blacktip Reef: 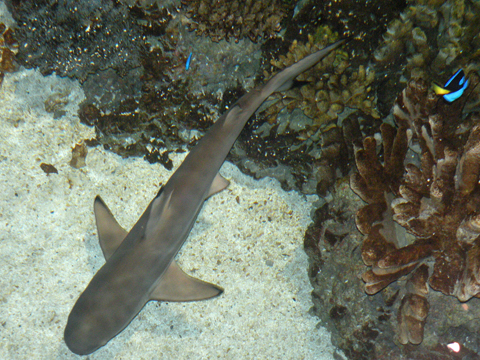