All day Tuesday I kept thinking it was Monday since Monday felt like Sunday. As it happened, Adam never came home on Monday night -- as soon as we got back from Longwood Gardens, he went to a party at a friend's and ended up sleeping over another friend's, then got back here at 9:30 in the morning and promptly fell asleep for five hours, since apparently sleeping in the car yesterday did not compensate for pretty much not sleeping at all last night. So I did laundry and various thrilling chores like that.

When Adam finally woke up, he needed a ride to yet another friend's house where they are working on a movie project, so I dropped him off there, then stopped at AC Moore which is full of Halloween stuff! He briefly returned home for dinner, then went out again, this time to see a late show of Guardians of the Galaxy. Here are a few photos of Monkeys Grasp for The Moon by Xu Bing at the Sackler Gallery, a barrel of monkeys created from letters suspended dozens of feet through the gallery's multi-level stairwell: 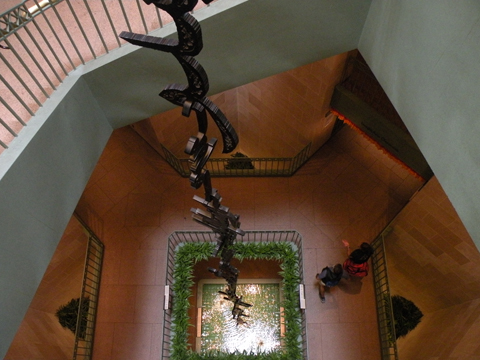