It has been a depressing day. I took Adam to his last orthodontist check-up -- he was told to wear his retainers a few times a week, call if anything feels different, be careful with his teeth, get regular dental exams -- but that good news was overshadowed by the news that Dr. Morgenstein, the dentist for whom we joined the practice, whom my kids saw for over 15 years, had died a few weeks earlier. He only retired several months ago; I guess he knew he was ill, but intended to keep working part-time.

My afternoon was uneventful -- son went to the pool, I did some shopping, bought a cheap dress for the beach and some Bath & Body Works stuff -- but we all came home to the news about Robin Williams, which was not yet being reported as a suicide. Paul and I were first-generation Mork and Mindy watchers and fans of both his comedy routines and his movies -- Dead Poets Society, The Fisher King, Good Will Hunting are iconic among our friends.

So dinner was quiet, and son spent the evening at a party for a friend who's leaving early for college. Paul and I watched Aladdin long-distance with Cheryl, though we discovered halfway through that our DVD is damaged and won't play certain sections (how this happened, I don't know, because during the era when the kids were watching the movie over and over, we were still watching on VHS). Now I have Happy Feet on because it's also a happy Robin Williams movie. 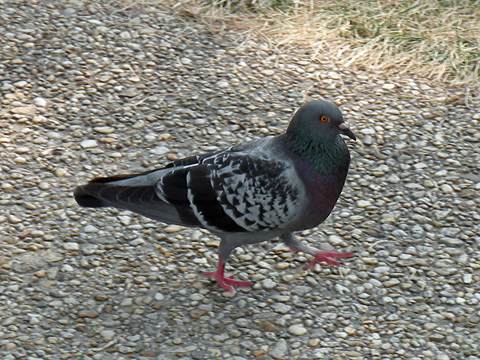 A pigeon who visited us walking to the Air & Space Museum on Sunday.
Collapse