We had to drop both kids off in College Park at different times on this gorgeous Sunday, so after taking Adam to his orientation kayaking trip -- a.k.a. "Turtle Camp" -- we got back in the car with Daniel and went to the Maryland State Fair. We've been on the fairgrounds for 4-H and train shows in other seasons, but we've never been to the fair, which I have to admit isn't as much fun for me as the county fair; there are more rides, but fewer animals, and I felt like the Chesapeake counties weren't represented well.

But the Maryland fairgrounds are adjacent to the Timonium Racetrack, which had racing all afternoon, so for the first time in my life, I saw a live race, something I am really ambivalent about -- I have really big issues with how the animals are treated, but I've always found it exciting to watch, and it was a real thrill to see the horses come into the turn with the ferris wheel in motion behind them. We also got to meet former Ravens Pro Bowl player Jamal Lewis and to watch a swimming pig and drink root beer floats. 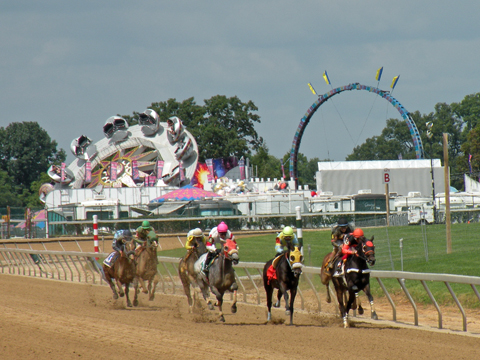 Since Daniel has his last full work of week coming up before he starts classes, we took him out to dinner at the Hard Times Cafe in College Park and dropped him off at his apartment where one of his roommates had just finished moving in. Then we came home and caught up on Outlander, which is quite enjoyable so far, and Masters of Sex, which we missed last week at the beach and I'm so glad we waited till the hour before the new one to watch because it was such a sad episode! I want to slap Michael Sheen, but he's great!
Collapse