Another quickie as I am quite sleepy after a pretty insane week -- I had expected to have kind of a quiet nostalgic couple of days while Adam was away at Turtle Camp, followed by an evening of packing and a fairly standard move-in day. Instead I spent many hours picking Adam up from a hospital, then getting up early and spending nearly 12 hours getting his broken arm examined and repaired, followed by a day of trying to help him pack around a visit to the end of Turtle Camp while he was on serious painkillers.

So on Thursday, we went with my mother to bring the rest of his things to his dorm and get them organized, probably with more micromanaging than Adam would have preferred under normal circumstances, but he didn't want to take too many painkillers while trying to do various activities so he let us. When he was ready to go meet up with people in his program, we left College Park and stopped at the mall for froyo. Then we came home, did some cleanup, and caught up on Legends and Dallas! A few pics: 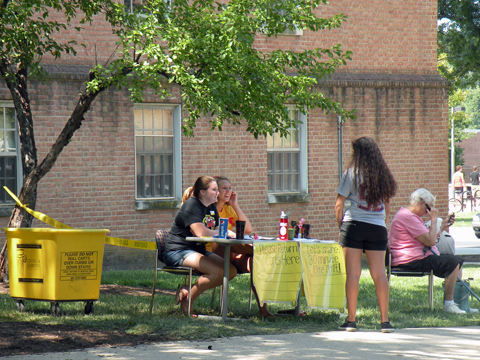