Tuesday was a catch-up day in every regard, which was fine because I had so much to do in the house that I had an excuse not to go outside in the ongoing muggy weather until evening. I was a week behind on laundry and have not made a dent in various cleaning projects in more than a week. I also did a bunch of computer research and other things too boring to report. We had thunderstorm warnings all day, though the rain did not arrive till evening and between storms we had a lovely sunset-hour rainbow. It is, however, still pretty warm and very muggy.

We had dinner at CPK with

wolfshark, and their husbands, after not having seen them for weeks despite living 15 minutes from one another because our summers have been so crazy. Then we came home and watched ABC's Making of 'Frozen' special, which put myself and

dementordelta in the mood to watch an animated movie, and since she couldn't find her copy of Frozen, we watched The Road to El Dorado instead. Speaking of Europeans in the New World, jousting at the Pennsylvania Renaissance Faire on Sunday: 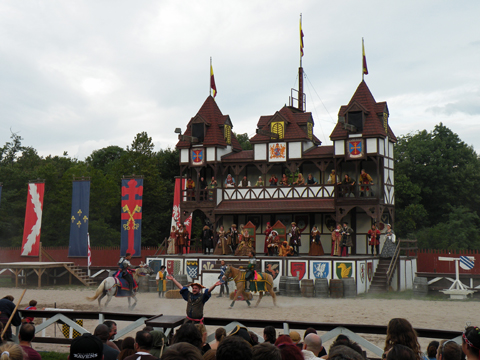