Paul, Cheryl, and I spent the afternoon at Boonesborough Days, the festival of food, crafts, and regional history up in the mountains of Washington County. We had lunch before we went, so our food purchases were things like corn fritters and kettle corn -- and we knew we were going to South Mountain Creamery afterward for ice cream -- but we looked at lots of jewelry, wood carvings, doll clothes, homemade soaps, antique cars, local archaeology, tea, sunspots via the astronomers who had set up telescopes there, square dancing, portable gristmills, and a box turtle some kids had found in the creek: 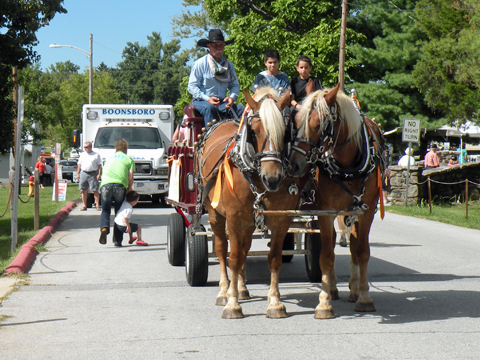 After a stop at South Mountain Creamery, where we petted calves, visited chicks in the hatching barn, and bought ice cream and cheese, we came home and watched some X-Men, then had the cheese and peanut soup for dinner. After Cheryl went home, we did a bit of cleaning up and watched Masters of Sex, which seems increasingly depressing -- I alternately want to smack Bill for how he treats people in general, women in particular, and tie him up until he agrees he needs psychotherapy -- and the highlights of the football games we only heard earlier on the radio, which ended as badly for the Ravens as the Redskins.
Collapse