We spent nearly the entire day in College Park with my parents, Paul's parents, and our kids, primarily at the football game! It was a very nice day despite the Terps' heartbreaking loss in the final seconds to the Mountaineers and despite the rain that started right before the game, continuing into the last quarter, at which point we were all so wet and chilly that we retired to a lounge in Adam's dorm to watch the final minutes. The game has been all over the sports news today, not because either team is expected to finish high in the rankings and not because of the score, though it was an exciting second half, but because Maryland wore uniforms decorated to celebrate the bicentennial of the Star Spangled Banner and the end of the War of 1812. 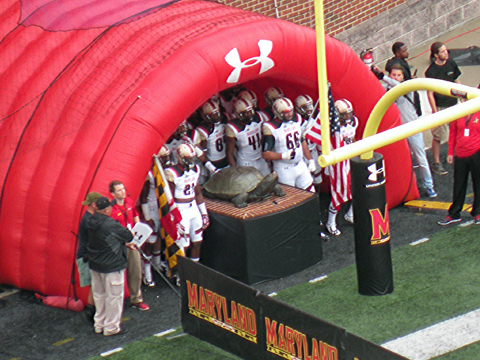 After the game, we walked back to our cars and went out to dinner at Mamma Lucia along with Adam's girlfriend, who had gotten a call that her mother had locked herself out of their house near where we live...and since her father was at his reunion out of town, he couldn't let her in. So after we took Daniel food shopping and dropped both kids off at their respective domiciles -- Daniel has a friend from high school visiting from a college on a trimester system that hasn't started for the fall yet -- we drove Adam's girlfriend back with us to drop off at her parents' house and rescue her mother. Then we came home for Doctor Who (creepily enjoyable) and Outlander (very good, sad, unnerving in the wake of Scotland's impending vote on secession).
Collapse