hufflepants at the Star Spangled Spectacular, celebrating the end of the War of 1812 and composition of the Star Spangled Banner, written in a boat off Fort McHenry during the Battle of Baltimore which we saw reenacted by bands at the Terrapins game on Saturday. We didn't board the biggest ships, which had hour-plus long lines, but we went on several schooners and a couple of clippers, and we walked around the gorgeous naval vessels and watched the Blue Angels performing over the harbor.

The festival had lots of nice giveaways from national parks collectibles to War of 1812 pins, plus guides to Maryland historical sites and waterways. We walked to and from the Inner Harbor past Camden Yards and through

hufflepants's neighborhood, which has fabulous restored houses and lots of cats including her two. Though the music-and-fireworks show was broadcast on public television on Saturday night, we didn't get to see it until Sunday when we got home (and the Orioles did not play the Yankees until evening, though I am delighted to report that they won). 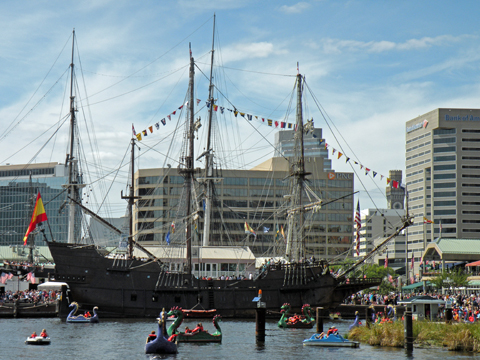