L'shanah tovah! I had a much less exciting Wednesday than Tuesday, though it was a nice day; I did a bunch of work and chores, then went out to Charming Charlie to buy a bag I saw on sale last week but didn't get (of course, they were sold out), and stopped at AC Moore to use a rewards certificate on glass and fairy lights. We had Rosh Hashanah dinner with my parents, a small group this year since we're having a bigger group to celebrate Daniel's 21st birthday over the weekend.

We watched the fabulous first episode of the David Tennant-narrated Penguins: Spy in the Huddle on PBS, then the increasingly violent Legends which at least has interesting women as well as Sean Bean, and then the season premiere of Nashville which is, well, pretty much Dallas with singing. Some photos from American Metal: The Art of Albert Paley at the Corcoran Museum, which is closing (the exhibit and the museum) for at least a year after this weekend: 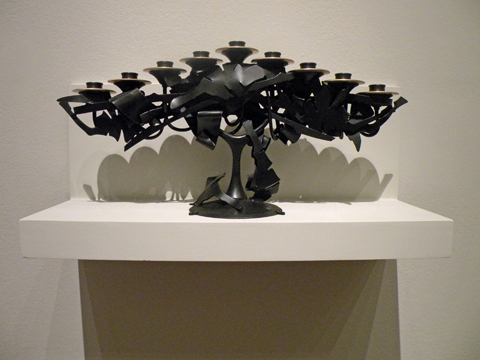