Sunday was another gorgeous early fall day, and we spent it at the Maryland Renaissance Festival with Daniel and Cheryl -- it was the last day Barely Balanced was performing and we had missed them the first weekend we went. We saw both their shows (one involves not just acrobatics but getting the stage and each other wet), plus the one Shakespeare's Skum show we missed last time (the pretty hilarious tragedy of Othello), the Faire's production of The Comedy of Errors (very well abridged and extremely well performed), some music, some stunts, the elephant, several frogs in the little ponds around the grounds, and the king! 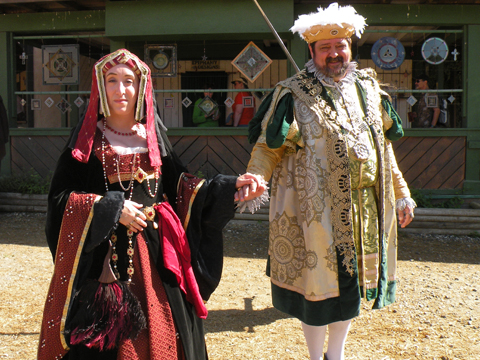 We ate dinner at the festival (I had macaroni and cheese on a stick, plus some bites of other people's cheesecake on a stick and key lime pie on a stick), then took Daniel back to College Park, where we briefly met up with Adam to deliver some food from his grandmother and leftover birthday cake. After driving home beneath a beautiful sunset, we watched the season premiere of Once Upon a Time (which I thought was okay not great) and the season finale of Masters of Sex (which I thought was great). Though we didn't see the games, the Ravens, Orioles, and Nationals all had a great day -- the Nats pitched a no-hitter!
Collapse