I am sure something happened on Wednesday but all I can remember is doing chores and enjoying the weather. I avoided the news because it was all environmental disasters, election nightmares, secret service farces, and ebola; I tried to stick to Stephenie Meyer supporting women in film and Hugh Jackman grabbing his balls for testicular cancer, though then I couldn't avoid celebrity weddings and babies. I may have had a glass of wine with dinner but that was because I needed the bottle empty for a craft project.

TV this evening included David Tennant narrating Penguins: Spy in the Huddle, which was unexpectedly stressful because baby penguins under threat; Legends, which has an awesome cast (I knew I'd love Sean Bean but am really enjoying Ali Larter and the rest), though also stressful; and Nashville, which had one gorgeous song by Scarlett and Gunnar and lots of soapiness that is filling the void the Dallas hiatus has left in my life. The Chesapeake beach at Flag Ponds on the last day of summer: 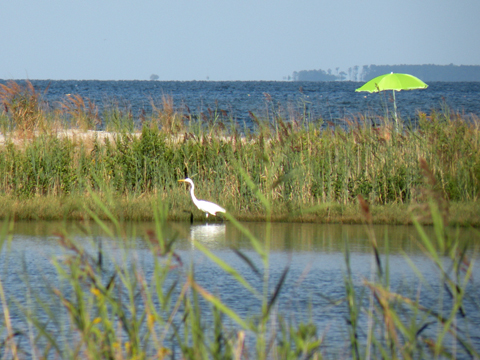