My daytime excitement on Thursday most concerned a katydid on the back window which had my cats extremely interested and a trip to AC Moore armed with a 55% off coupon for shiny marbles. (I stopped in a Hallmark store too, but it was an unsuccessful trip.) Everyone was waiting for evening, when the Orioles played the Tigers in their first game of the postseason -- and the O's won by a lovely large margin! We are really hoping for a Baltimore-Washington Parkway series.

We also watched the season premiere of Gracepoint, about which I feel completely ambivalent because I don't see how they can improve on Broadchurch and the remake really seems to exist entirely because Americans can't understand any non-American English besides old school BBC accents and because Olivia Colman is not considered sexy enough for US prime time. But I love Tennant, and thus far it's very close to the original. Barely Balanced at the Maryland Renaissance Festival: 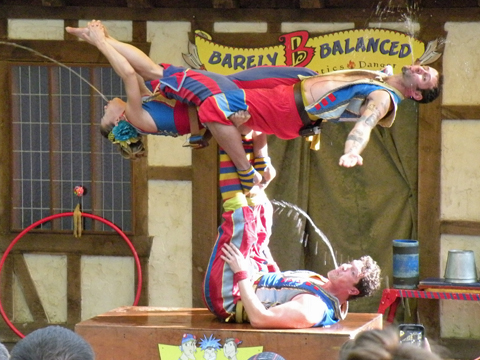