Daniel is taking a class in Musical Cultures of the World for which he needed to attend a live performance of sacred music, so after a quiet morning, we went to the National Cathedral for the daily Choral Evensong service. The music was beautiful, performed in part by a choir from Lancaster, PA, but that wasn't the highlight of our visit, since it was the feast day of St. Francis of Assisi and the cathedral was holding its annual Blessing of the Animals service on the steps outside the Cathedral under the rose window. There were hundreds of dogs (and a few cats and small animals, though those were cowering in carriers), plus volunteers from animal rescue organizations and several ministers to perform blessings on the grass. 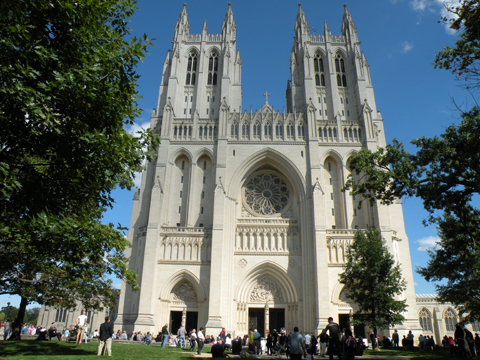 We came home for dinner before taking Daniel back to College Park, causing us to miss the great joy in Baltimore when the Orioles beat the Tigers to advance to the ALCS, which we have just learned will be against the Royals -- the Ravens had lost earlier in the day, but I doubt anyone in Maryland is focused on that right now! Sports news had been pretty good all day, since I woke up to learn that overnight in Australia, Russell Crowe's Rabbitohs had won the premiership. Daniel needed to prepare meals for the week, so we stopped at Shoppers Food Warehouse with him before taking him to his apartment. Then we came home for Once Upon a Time, which was a little silly but not nearly as much as Saturday's Doctor Who, and now we're watching the Patriots win.
Collapse