It was a drizzly but otherwise nice Tuesday. I had a whole pile of work to do -- and actually finished it! -- and in the late afternoon Paul and I went out to do a bit of shopping (kitty litter, shampoo, and we had a bunch of Kohl's bucks that we needed to use before they expired).

After dinner we watched the first episode of The Flash, which was okay -- pretty cardboard characters, especially the women, backstory full of every superhero cliche -- but just because it kept its sense of humor, I liked it better than Gotham. And, to tell the truth, better than the Agents of SHIELD episode that came afterward, in which it became even more apparent that we're getting some perverse iteration of the Buffy/Spike redemption arc in Skye/Ward, except Brett Dalton is no James Marsters and Skye is SO VERY MUCH no Buffy.

Here are some more photos from National Cathedral, including the north rose window, the 'Space Window' with a piece of moon rock presented by Neil Armstrong, Buzz Aldrin, and Michael Collins, the tributes to Washington and Churchill, and some of the fiberglass sculptures from Amen: A Prayer for the World. 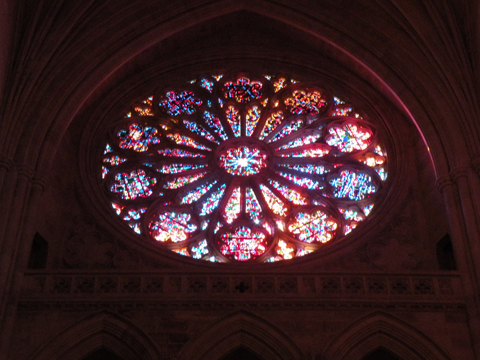