It was a warm but miserable day in the DC area, with tornado warnings in three counties near me, including near College Park, and weather that alternated among steady rain, pouring down buckets, and raining so hard I had to get off the interstate because I couldn't see ten feet in front of me. The only bright spots were lunch with

vertigo66 for her birthday at Tara Thai, where both the food and the company were very enjoyable -- we both had vegetarian pad see ew -- then a bit of shopping including a stop in Charming Charlie, where I used a coupon and the store's clearance sale to get a couple of bracelets for under a dollar. In late afternoon, my neighborhood finally got an actual bright spot, though you can see in the last photo how quickly the sun disappeared and it faded! 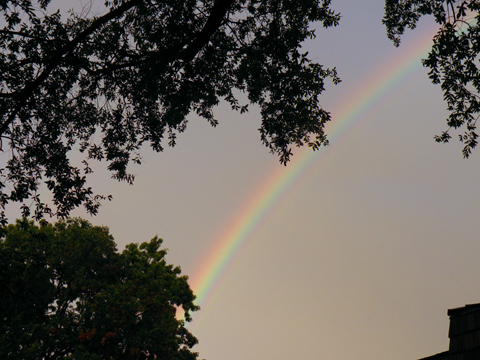 We watched Halloween specials, even though we own It's the Great Pumpkin, Charlie Brown (uncut) on DVD and even though Toy Story of Terror is extremely derivative and not very fun apart from getting to hear most of the original voice actors reprise their roles (including Lori Alan, my high school classmate). Then we watched some of the Cardinals game to attempt to assuage our sadness over the Orioles loss to a team I will have to root for if the Giants make it to the World Series before Nashville, which is actually pretty good this season -- I like the music and the actresses, but sometimes it's very soapy, though I appreciate the handling of Juliette's pregnancy and discussions of Tennessee's onerous laws putting burdens on women seeking either abortions or adoption privacy.
Collapse