I took Thursday off from everything except goofing off with Cheryl! Though we had a near-crisis when we got home from picking up lunch at Lebanese Taverna and discovered three separate screw-ups (grape leaves never even included in the order, plain hummus missing, hummus with veggies replaced by hummus with meat that neither of us eats), then were told when I called that they had no record of the transaction even though I had an order number and credit card receipt, took dropping the name of the marketing director to get the manager to stop jerking me around. Meanwhile Cheryl and I were watching Rough Magic, in which Bridget Fonda is fun, Russell Crowe is awesome, and the storyline is total crack, and Flushed Away, which Cheryl had never seen and Hugh Jackman as a rat who sings and parodies Disney is really a must-see.

Paul came home just as the second movie was ending, after which we all went to take a walk in Cabin John Park at Locust Grove to see the changing leaves whose peak we mostly missed while we were in Los Angeles. On the way home, we stopped at the produce stand near my house to get a pumpkin, whose season we also mostly missed -- they only had the huge $16-$20 ones left (the food store yesterday only had the tiny $8-$10 ones left, and we had no time to get to an orchard before tomorrow). Then we all watched the Carrey-Oldman-Firth A Christmas Carol (wrong season, I know, but it has ghosts) before Cheryl had to go. After a quick dinner, Paul and I watched Gracepoint and rejoiced over the return of Elementary, though I must admit I liked the villain in the premiere better than the new regular. 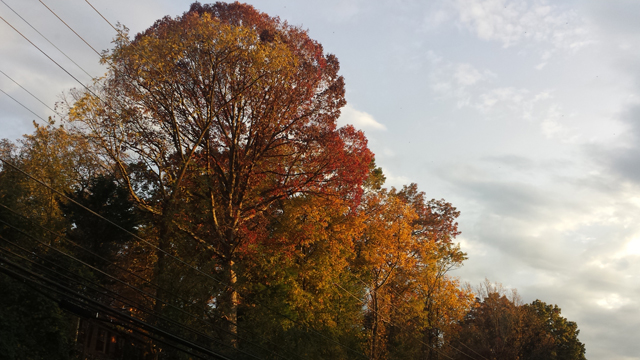