We are home after another lovely day in Staunton with Cheryl, where, after breakfast in the hotel, we went walking around the sleepy town, looking at the churches and visiting the firehouse with restored 1911 fire engine and 9/11 memorial. As the shops started to open, we went to see glassblowing at Sunspots Studios, had lunch at Taste of India which has possibly the best vegetarian Indian buffet in the mid-Atlantic, tried to visit the maps exhibit at the Augusta County Historical Society though it was closed, and stopped in the Staunton visitor's center.

Then we went to see Marlowe's Edward II, which was excellent -- I have seen two filmed versions but had never seen it performed live, and as always the acting at the American Shakespeare Center was terrific and the production very dynamic with a minimum of props. There were a few audience members apparently scandalized by the actors kissing on stage, who fled at the intermission, making us wonder what they were expecting from the very homoerotic poster even if they knew nothing about the drama. We were more shocked that they portrayed the deposed king's ultimate fate on stage. 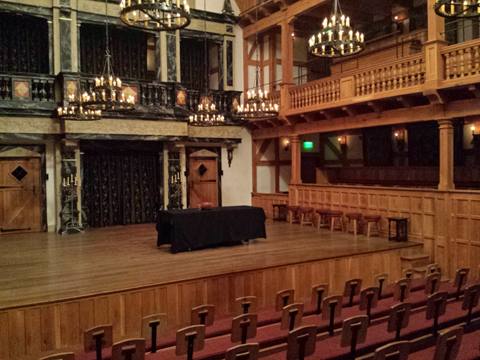 Sorry about the quality of the photos -- I had thought none were allowed, so only had my phone with me, though they let audience members back into the Blackfriars after the play ended to take pictures. We said goodbye to Cheryl and had a relatively traffic-free if depressingly-in-the-dark drive back home, where we arrived just in time for Once Upon a Time, which we ate dinner while watching. Now we are watching the horror that is the Ravens-Steelers game -- let's just say that Baltimore is having an even worse day than DC football-wise -- and petting our neglected cats.
Collapse