It was a weird Wednesday even forgetting the post-election blues (our district still does not have a congressman-elect, since it's so close they have to count the absentee and provisional ballots). Our landline had not been working for more than a day, so we set up an appointment with Verizon for Friday, but they were able to come Wednesday so

apaulled came home at lunchtime to work from home for the rest of the day in case they had to get to the junction box behind the sump pump that I can't reach or anything like that (turned out the problem was not in our house or at our local junction box, but at the main junction box for the neighborhood). Plus a pipe broke across the street and there were lots of noisy trucks trying to stop the flow of water: 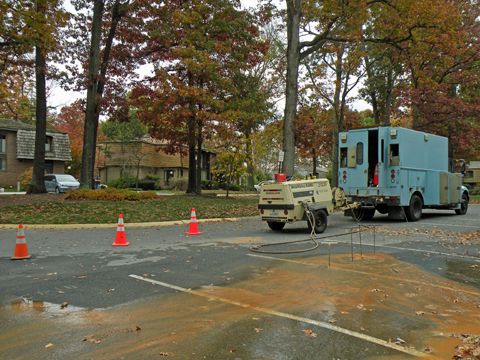 We did get to have dinner at California Tortilla with

artemis_prime and her husband, though we went so early because he had a class that we were home before 7. So we watched Restoration, the Robert Downey Jr.-Sam Neill royalty-and-plague movie with gorgeous sets and costumes, great performances, some odd scripting issues, definitely worth seeing. And we watched The 100, which has ongoing major scripting issues but a huge number of really awesome women who make up for it all -- most consistent Bechdel triumph of anything we watch! And I don't care whether Benedict Cumberbatch is getting married or not but given the frequent level of hysterical hyperbole on Tumblr, I was glad it was all about that and not about politics for once!
Collapse