Daniel has an interview in Madison on Thursday, so Paul worked half a day so we could see Daniel off together at the airport. Then we drove through beautiful Virginia wine country to the West Virginia border and spent the afternoon in Harpers Ferry, where we had lunch and enjoyed a very pretty if chilly few hours. The entire downtown area of Harpers Ferry is a historic reenactment of how it looked around the Civil War era, with several small museums and exhibits plus several reconstructed shops kept by the National Park Service, as well John Brown's fort (actually a fire house) and the foundations and outlines of many other buildings used by the Union and Confederate soldiers who came through the town.

We visited the confectionery, clothing store, inn, and bakery, and we walked around the church and blacksmith shop, both of which were closed (we were practically the only tourists in the town). On the side streets, there are also some nice boutiques and little restaurants, some of which we stopped in before we followed the Appalachian Trail to the pedestrian bridge that goes over the confluence of the Potomac and Shenandoah. Then we walked along the river trail to the mill ruins, where we saw deer and geese in the woods. We took the bus back to the park service parking lot as snow began to fall, and though we had thought about stopping at Sugarloaf Mountain on the way home, we found it closed amidst flurries. 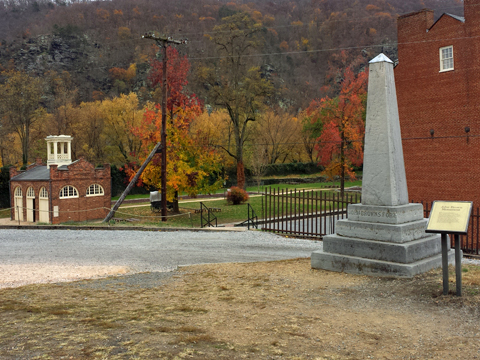 We stopped at Lewis Orchard for locally made cheddar cheese on the way home, then ate that with pumpkin soup and pita for dinner. Even though we are not regular Supernatural viewers, we have seen all the meta episodes, which have been fantastic, so we watched the hilarious 200th episode, "Fan Fiction" (if you are at all familiar with the fandom, you do not have to be up on the show's mythology to howl through the entire thing). Then we watched Gracepoint, which I like best when it hews close to Broadchurch -- I enjoy the similarities and differences in Tennant's performance -- and Elementary, which I like best when the character stuff is nothing I saw coming, so there was some really nice stuff this week.
Collapse