Thursday, thankfully, was warmer than Wednesday! I did laundry and chores in the morning, and after lunch, Paul and I picked up Daniel from College Park and drove him to Baltimore for a job interview. He was already in a good mood because he got a great offer from the company at which he interviewed last weekend, and he is talking to another big company next week. The Baltimore company is in the Federal Hill neighborhood, overlooking the harbor on one side and the stadiums on the other, so while Daniel was interviewing, Paul and I visited the Cross Street Market and walked to Federal Hill Park, which has great views of the Inner Harbor and has both Civil War and War of 1812 monuments, plus a playground with a miniature B&O Roundhouse, USS Constellation, and Signal Hill Tower cannons. 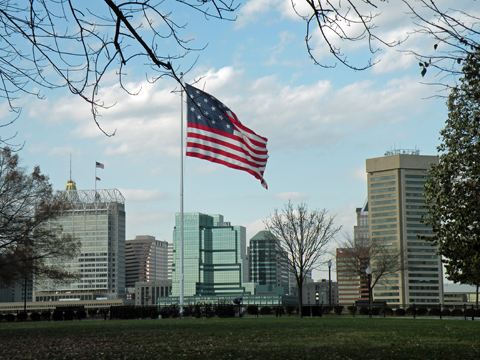 We wandered a bit in Federal Hill's shopping district -- lots of restaurants and bars targeted to sports fans, quite a bit of furniture and antiques -- until Daniel was finished, then we drove him back to College Park and took him to Azteca for Mexican food for dinner. (Adam was on the way to a formal with his girlfriend, so we didn't get to see him.) We ran into lots of traffic driving home due to a Beltway accident, but we made it in time for Gracepoint, which is going to make me SO mad if it doesn't keep Broadchurch's ending in big strokes even though the producers said they weren't going to, and Elementary, which had such a strange open ending that we thought maybe the episode had cut off prematurely after starting late because the network decided to show Obama's speech on immigration.
Collapse