I sorted beads and reorganized craft stuff downstairs and have no idea how it got to be nearly midnight so I shall keep this short. We had a nice low-key Sunday; got leaves off the deck, read a decent amount of the paper, then after lunch we went to Huntley Meadows, where the amphibians and reptiles were hibernating for the season but we saw lots of evidence of beaver activity, plus little fish and lots of waterfowl: 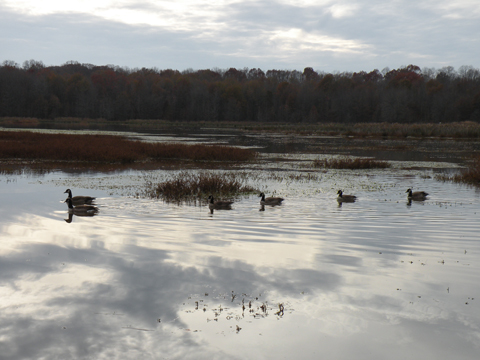 We stopped at CVS (had planned Trader Joe's but found out my mother had already gotten the tofurkey we were going to buy), came home for dinner, and caught up on the Once Upon a Time mid-season finale a week late, still wishing Snow would shut up but I love that it was all about women saving and obsessing over women with the men largely sidelined, even if I wanted more Swan Queen, less Frozen! And no pre-Thanksgiving snow!
Collapse