I hadn't read that poem in years when I found it the other day while looking for a poem about Baltimore to post with pictures of Federal Hill. I'm not sure which is more depressing: that it was written in 1925 and still comes up as one of the most famous poems to mention the city, or that I could easily believe this is not a poem of "old Baltimore."

In happier Baltimore news, I just watched the Ravens beat the Saints. I feel vaguely guilty watching this instead of leaving the news on, but there's not much I can do tonight, now that I've fired off my email to Governor Nixon asking him to protect the lives of those he serves by not authorizing the use of rubber bullets against peaceful protesters.

It was a beautiful day, no rain after the morning, temperatures in the 70s during the afternoon and still in the 60s, though we've been warned to expect snow on Wednesday when everyone's trying to get home for Thanksgiving. When I wasn't doing work, I was out enjoying it with the deer and bunnies. Here's a heron from Sunday at Huntley Meadows: 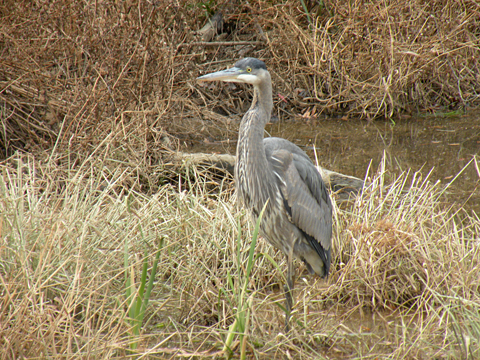