We had another movie day -- since we all wanted to see it and we saw the first two together, we went to see The Hunger Games: Mockingjay Part One. I'm not sure I loved it as much as I loved Catching Fire -- I think Katniss is a stronger character in that one and I wanted more Haymitch, less Gale, and in general less gratuitous love triangle since ultimately it's not important to her character arc -- but I thought Julianne Moore was brilliant, I was glad to see Philip Seymour Hoffman, I love Natalie Dormer, and I think Jennifer Lawrence gets better in every movie she's in. I'm still not sure Mockingjay needed to be two movies, but it's not like I was ever bored, and the focus on propaganda is very timely.

Afterward we went to Blaze Pizza for dinner -- there's actually one in College Park but neither Daniel nor Adam has ever eaten in that one -- I got every kind of cheese they have on mine. Adam went over to a friend's house where a bunch of his other high school friends were gathered while on break from their respective colleges. Because we are likely to see The Hobbit: The Battle of the Five Hours Armies when they're next home at the end of the semester in a few weeks, we watched the extended version of The Desolation of Smaug and now I am SO irritated we did not get Thrain in the theatrical version in place of some gratuitous special effects! Since I'm short on time, have a photo of fall in Harpers Ferry: 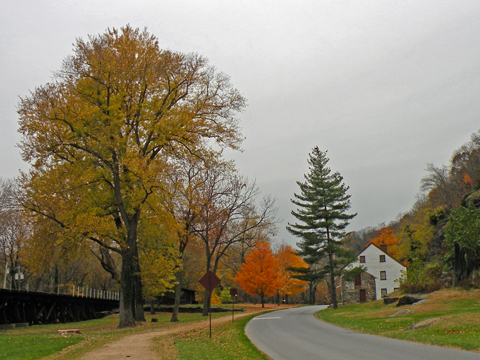