Once again it took an insane amount of time to get through my email in the morning, and I wish to inform nonprofits, like retailers the day before, that I unsubscribed from more of them than I donated to. Otherwise, it was a pretty quiet Tuesday, cold and rainy and mostly dark; Paul worked from home because he had phone conferences, we had lunch together, and late in the day we started cleaning up the front hall closet area so we can make some attempt to organize the living room, though for as long as younger son's bike lives here, we can only change so much.

I am having a weird social media week -- someone I've been friends with in real life since college unfriended (not just unfollowed) me because I post daily, which she finds a distraction, and once (!) used Facebook messenger to send a group message. I love the way Facebook lets me stay in touch far better than the occasional letter or phone call ever did. I am confused when people would rather cut ties completely on the grounds that they can't keep up with everything; does anyone really find being overlooked more offensive than not being connected at all?

In actual news, I was entertained by the medieval sex scandal revealed by Richard III's DNA and happy for the umpire who came out. Tuesday is our busy TV night: I liked the Flash-Arrow crossover (I like the women on the latter), was only half-interested in Agents of SHIELD (can Skye and Ward both go to Mars or something?), really liked Forever (though we've seen one too many clueless woman manipulated by romantic interests, I'll take what I can get in the time the show has left). Some pics of National Cathedral's ongoing rebuilding after the 2011 earthquake which did tens of millions in damage: 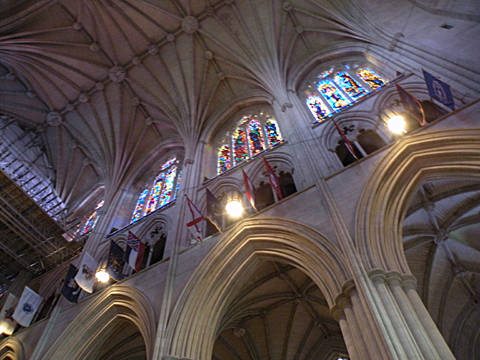