I know I am very dull this week -- we are hitting the weeks around the solstice when I think I need a UV lamp, especially when we have several gray days in a row. I spent the morning finishing a review of Deep Space Nine's "It's Only a Paper Moon" and the afternoon I watched Magic in the Moonlight, which had gorgeous scenery and Colin Firth playing Mr. Darcy, and in every other way was such a Woody Allen comedy (which I was already feeling guilty for watching) that I wound up pretty aggravated.

We had dinner with my parents and talked briefly to Daniel, who accidentally broke his phone so we will need to call in the warranty to get him a new one, then we caught up on Elementary (which I enjoyed a lot this week) and Gracepoint (which has only one more week and I am SO hoping they lied about changing the Broadchurch ending). We have had a lot of cats sitting on heating vents and pacing in the back window because of squirrels, plus hiding from invisible indoor menaces like this: 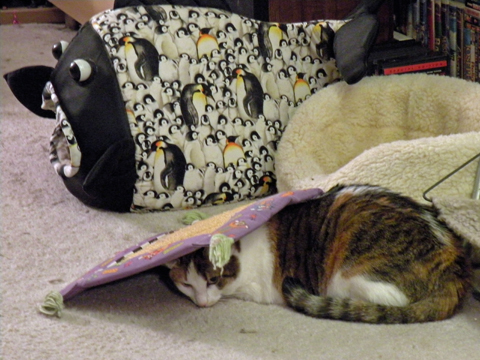