I had a somewhat chaotic but fairly nice (and very rainy) Saturday. After the cats got us up early to be fed, we went back to sleep and slept late, then had to rush to get to College Park to pick up Adam, who was coming to our area for a couple of hours to interview a friend of my parents' for a business class. Then we took him back with the intention of dropping a few things off for Daniel, but Daniel REALLY overslept -- he was apparently up most of the night working on a class project -- and since we hadn't heard from him, we stopped in the campus bookstore.

Eventually he texted and we went over to his apartment. The good news is, he has a job offer from the company that in all likelihood would be his first choice not just because it's a great company but because he has friends already working there and living in the city. The bad news is, he broke his phone (and by the time we left the student union to drive to his place, the basketball game had just let out and traffic was completely insane from one side of campus to the other). We got everything straightened out but we were very late to get to Sharkie's!

Sharkie let us play Cards Against Humanity even though her birthday present was at home since I thought I'd have time to stop there first. I mostly had cookies for dinner, which I say with no regret. When we finally got home, we fed our neglected cats and watched The Maze Runner, which was enjoyable until we started getting an explanation for what was going on -- maybe the sequel will make more sense, but decent acting was wasted on a contrived wannabe Hunger Games. From last winter, orchids at the US Botanic Garden, including the ones in the ladies' room: 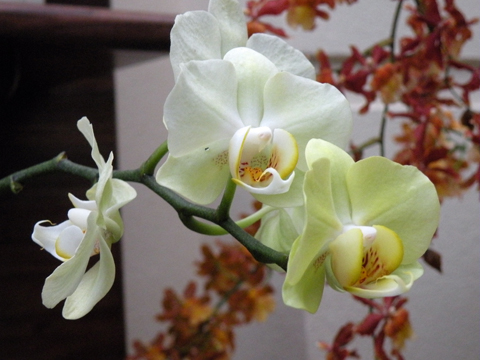