Because our fall apparently has not sucked enough, this morning our water heater broke and started spewing water in our basement. It didn't damage anything significant, but the water heater itself had to be replaced, plus the pipes had to be brought up to current county code and a whole host of other plumbing issues have emerged because of this that we really did not need on top of every other emotional and financial drain of the season. After a long and frustrating day during which we did not visit farms or the county pottery show or anything else we'd thought of doing, and during which we spent our entire travel budget for 2015, the only thing I really wanted was a hot shower in my own bathroom, and I couldn't even have that.

We thought there might be a silver lining in that we dragged out all the stuff long languishing in the back of the laundry room to put on Freecycle, but the Freecycler who was supposed to pick up our ancient portable crib and plastic kids' basketball hoop wrote in the evening to apologize and explain that her dog had died. So although I hear it was a nice day out compared to the past several, I hardly saw the sun and am really not a bundle of joy at the moment. We did watch Once Upon a Time, which I liked -- all the characters with agency were women, apart from Gold who's going to get his ass kicked -- and we're only a week behind now on Madam Secretary. Here is the Salon Doré from the now-closed Corcoran Gallery: 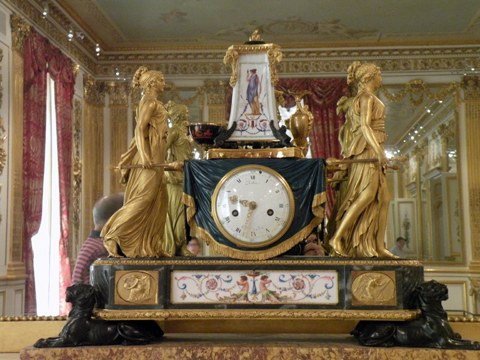