We had a fairly uneventful Tuesday. Adam had slept out at an all-night movie-watching party with some high school friends, so I went to pick him up after lunch and dragged him with me to pick up an awesome freecycling giveaway (a huge blue witch ball, 50 glass marbles, and a crystal perfume boettle). Daniel went with Paul so they could renew their passports, which actually took less time than getting through downtown Bethesda took me! When we all got home and got organized, we had green curry and peanut noodles for dinner.

After we ate, we lit the candles for the last night of Chanukah, and exchanged presents (I got The Sherlock Holmes Tarot, which has the best Happy Squirrel card ever -- the Giant Rat of Sumatra -- and Cards Against Humanity). Then, though I know it's a weird choice for Chanukah, we watched Conspiracy, the Final Solution movie with one of the best casts of male actors ever assembled. It was predictably depressing, so now we are watching Rush, which is an improvement on most racing movies I've seen! Some more photos from the Rawlings Conservatory: 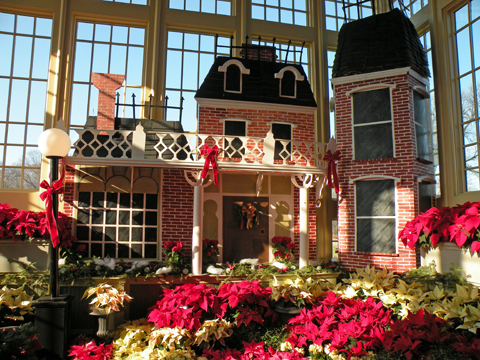