It was a drizzly Sunday in the DC area, but that didn't stop us from having a nice day, apart from the fact that Daniel has a cold and doesn't feel well, plus one of Adam's good friends from both high school and college was in a car accident and is going to need surgery which is always scary. Cheryl came up in the late morning, Paul made us all lunch, then we went to Hillwood, leaving older son resting his head and younger son going out with a friend. Marjorie Merriweather Post's estate is decorated for the holidays, with this year's theme being trees that echo the Cartier jewels on display in the Cartier exhibit in the Adirondack Building in the gardens. Both the house and the exhibit were gorgeous for the season -- the Russian icon displays have been redesigned and it's always fun seeing the pictures of British royalty on display! 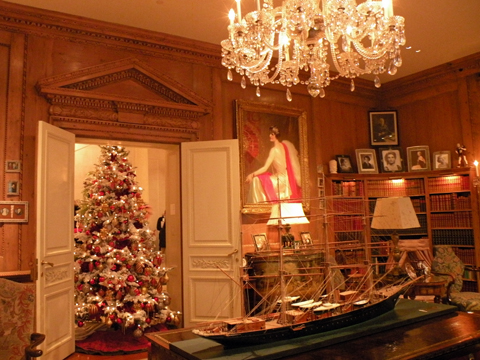 When we came home, we watched Horns, which was marketed as a Dorian Grey story -- I thought the character grew bigger horns as his behavior got worse. That is not what it was about at all, and though I found the supernatural theology somewhat muddled, it was interesting and Daniel Radcliffe's performance showed quite a lot of range. We also watched a bunch of Shoujo Cosette episodes (which included Javert's "Would you like my hat?" line!). But the biggest news from the TV this afternoon was the Ravens' victory over the Browns, which got them into the playoffs (I was not devastated that Washington finished its season being crushed by the Cowboys). In the evening, because we noticed it was on cable, we watched the Eric Bana Hulk movie, which I did not love but didn't think was significantly worse than the Ed Norton one.
Collapse