We have had a stressful Monday. In the late morning, we went out with Adam, picked up four of his friends from high school and college (mostly cross country and track runners), stopped at a store to buy Get Well balloons, and drove to Baltimore, where their mutual friend is at Johns Hopkins waiting to have surgery on Tuesday after a car accident on Christmas and some scans at a local hospital indicated cause for concern. The friend seems in good spirits and his parents have a lot of relatives around, but they must all be scared -- I know I am.

At least the friend got to see a lot of people who care about him -- in addition to the ones we drove, there were a couple of others at the hospital when we arrived, and Adam's former girlfriend and her father came a bit later; I hadn't seen her since before Thanksgiving nor her father since the Fourth of July. We had lunch with all the kids at the Subway in the medical complex, and when eventually we got home around 7 p.m., we ate dinner and watched some Adam West Batman episodes to unwind. Hillwood holiday displays to go with the Cartier exhibit: 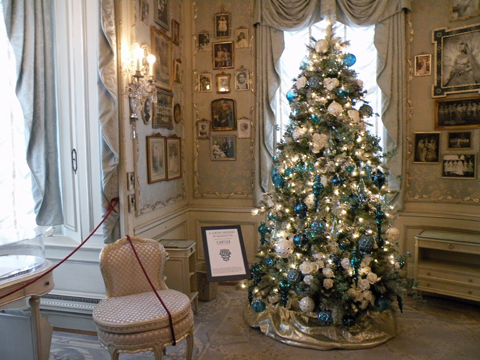