Happy New Year! Since Daniel and I both have colds, we did not do anything too wild on the last day of 2014. We all slept late, then we went out for a late lunch at the Silver Diner (I still had a birthday coupon for a free meal and dessert) and stopped at Trader Joe's and Petco for hummus and kitty litter. Adam had plans with his girlfriend Christine in the afternoon; the rest of us watched bowl games, though after Maryland's miserable performance on Tuesday night, we were not all that excited!

In more important news, Adam's friend's surgery went well -- I even got a reply to a Facebook message wishing him well, which I am taking as a great sign, if he can concentrate enough to write back to his friends' parents. Adam went out to dinner with Christine, then they both went to a New Year party. The rest of us stayed in rather than exposing anyone else to our germs, and to make sure we'd have energy for our plans for New Years' Day. Some more Seneca Creek State Park holiday lights: 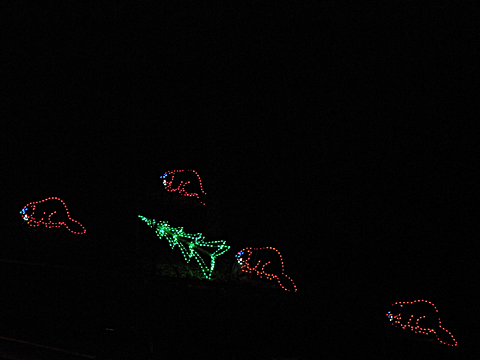