THIS COUGH CAN STOP ANY TIME REALLY. I won't complain about the cold weather, I won't complain that we still have snow and ice everywhere, but I would like my voice back for the weekend and I would like not to be exhausted from coughing. I got to have a quiet morning, at least, watching Deep Space Nine's "Chimera" since I need to review it, and although I'm not sure it's in my top three best episodes of the series, it is definitely in my top three episodes I love the most, so it's always awesome to have an excuse to rewatch it.

Adam went to an afternoon murder mystery party (with the boy who had surgery a week ago, so that was great news); the rest of us went to get haircuts (mine is not dramatic, just trimmed layers). We had a late dinner with Adam's girlfriend and watched some Adam West Batman with her, then watched Elementary -- any episode in which Sherlock must argue why Bella should have ended up with Jacob instead of Edward in Twilight is by definition a good one. Some of Marjorie Merriweather Post's chandeliers at Hillwood: 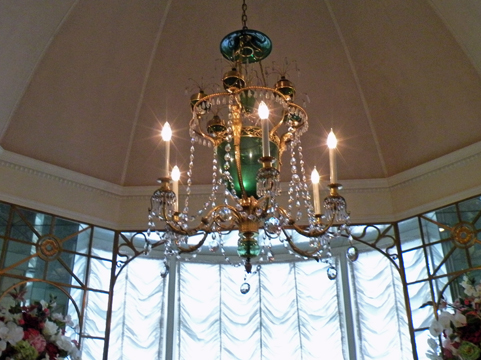