We started the day with freezing rain and had cold rain for the rest of Monday. It wasn't terrible, since the forecast was for potentially hazardous weather, but it wasn't pleasant to be outside. Paul worked from home, starting very early in the morning so that in the middle of the afternoon we could go see Into the Woods. I liked it, didn't love it, though I should add that it's not my favorite Sondheim musical by a long stretch, and except for Bernadette Peters I'm not particularly attached to any of the original cast. Streep's singing is vastly better here than in Mamma Mia, though I find Blunt somewhat overrated. Pine and Magnussen's "Agony," sung while straddling a waterfall, is the most pleasant surprise. I like Kendrick, too, though Cinderella's motivations never make any sense.

Adam had gone to IHOP with Christine for pancakes while we were watching the musical, and afterward they came back to our house, where Christine decided that since she had never seen The King's Speech, they should watch it with me. You can imagine what a hardship that was not for me (Daniel watched too and was laughing at all the appropriate parts). Because of how late we started the movie, we ended up eating dinner quite late, though we did not miss any significant parts of the college football national championship (I was kind of rooting for Ohio State in Big 10 solidarity even though I usually root against them and my west coast relatives were rooting for Oregon). Here are some photos celebrating Sleepy Hollow's most famous fictional resident and his creator, including his burial place: 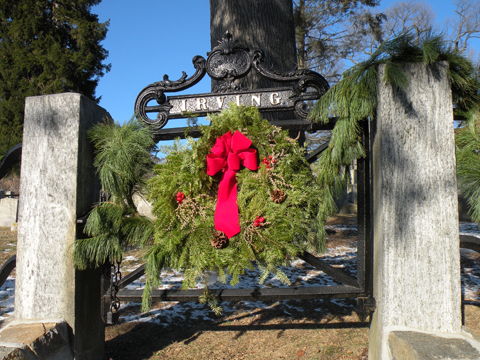