We had a pretty quiet Friday. Adam and his girlfriend went running at the high school track, then went out for coffee together. Daniel worked on sorting and organizing things. I wrote a review of Deep Space Nine's "Badda-Bing, Badda-Bang", which seems more mediocre in retrospect, though my major Star Trek activity for the day mostly involved the impromptu Voyager reunions online to celebrate the show's 20th anniversary. Paul went to work and cats snuck onto the vent under his desk.

We had dinner with my parents, then Adam went to watch movies with friends. The rest of us watched Before I Go To Sleep, the Nicole Kidman-Colin Firth-Mark Strong thriller for which I was completely unspoiled and therefore quite surprised by the ways in which it was not like Memento, which at the outset it seemed to mimic. It's not a great film, but it's worth watching, and Kidman is quite good in it though I often find her phony. From Lewis Ginter Botanical Garden, the Richmond-in-miniature train display: 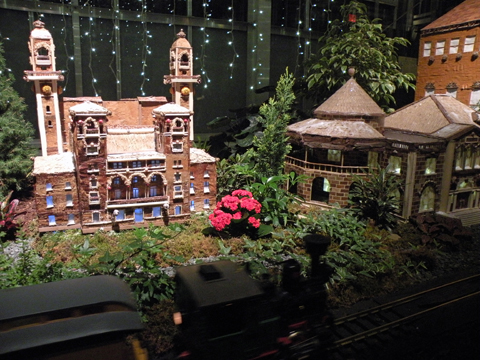