My Tuesday started with some entertainment, namely squirrels discovering that we had put a pumpkin left over from Halloween on the deck and proceeding to gnaw their way to the seeds, even though we'd cut the top off to help them. I did some laundry and some cleaning-up-the-basement, not that you'd notice since it's mostly the laundry room that benefited. Paul worked from home to wrestle with our new modem, which did not cooperate much on Monday -- it's better now, knock wood -- and Adam did tax stuff, though we all got to have lunch together. If I had known earlier that it was Penguin Awareness Day, I would have done more to make people aware of penguins!

We went to see Foxcatcher, which in many ways is not my kind of movie (wrestling + murder + pathetic women's roles despite big name actresses = nope), though the performances are superb, even though the fact that this movie got two Oscar nominations in those categories and Selma got none is unforgivable. We ended up having California Tortilla for dinner because the chicken the meat-eaters were going to eat looked questionable. I paid almost no attention to the State of the Union (sorry Obama) and none whatsoever to the rebuttal -- I figure Stewart and Wilmore will cover the best parts much better than the news will. Some Hillwood Gardens toads from last spring: 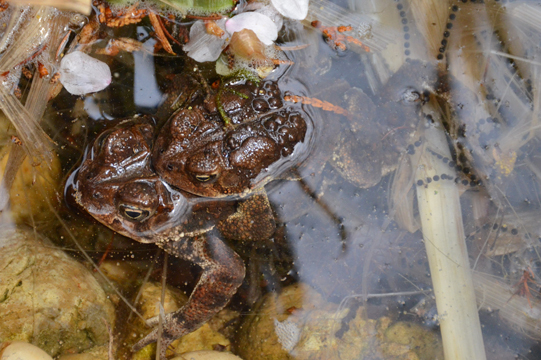