We were warned since midday Tuesday that there would be snow on Wednesday, and indeed there was -- quite a bit falling at one point, though the temperature hovered right around freezing, so although it iced the trees beautifully, it did not stick around for long there or on the roads. Even so, I stayed inside where it was warm with cats, though Adam spent most of the day skiing with friends -- they left early when the slopes got slippery and hard to see -- and Daniel went out to lunch with my father. I am now caught up on Sleepy Hollow ("call upon your own Abigail" -- bless you, Katrina) and Downton Abbey (I'm mostly as bored as Mary always looks -- stop making Anna and Bates miserable, already -- except when Violet has a secret past or Carson is trying to figure things out). 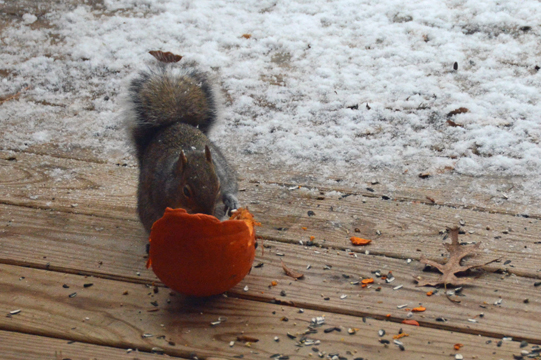 The snow had turned to slush in the evening and mostly dripped off the trees, so while Adam was out visiting some friends who couldn't go skiing, the rest of us saw The Theory of Everything. What I'll remember about it primarily is the acting: Redmayne is extraordinary, Jones also terrific, though obviously the demands on her aren't the same. The screenplay is a bit of a disappointment, too little science and way too much hagiography of the devoted wife a la A Beautiful Mind -- Jane Hawking is more interesting in real life than she ever gets to be in the movie. The directing is fine, but I'm still aggravated that this and The Imitation Game get so much more awards consideration than Selma. But I was delighted to see David Thewlis playing Remus Lupin again!
Collapse