Sunday was a nice day, though every hour my phone dutifully warned me that it was going to snow before the night was through -- nothing like what's going to get dumped north of us, though. We went to Black Hill Regional Park hoping to see eagles as we have before; the eagles were hiding, but we saw Canada geese, mergansers, coots, cormorants, seagulls, crows, and some ducks that were too far away to identify as well as little songbirds. We also stopped at various stores to exchange a defective shirt, get kitty litter, and pick up emergency food supplies in case the weather forecasters underestimated the snow totals. Here are some of the birds plus a snake in the Black Hill nature center: 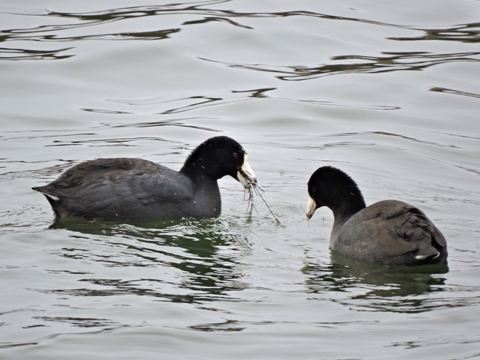 I spent most of the evening on my butt, starting with watching the end of the men's figure skating long program at the US skating championships, very enjoyable given that we have a number of really beautiful skaters right now. We ate dinner while watching the red carpet for the Screen Actors Guild Awards, then the show itself, which mostly went precisely as expected. It delights me that Arquette and Moore are doing so well this season and I'm glad that people get more attention get more attention on TV than in movies. I thought that if Keaton were going to beat Redmayne head-to-head, it might be here -- he's older and he's American -- but now I'm thinking Redmayne is probably a lock for the Oscar.
Collapse