It was a chilly Friday with cats on vents and squirrels snooping around hoping for handouts of birdseed. Paul worked from home so that we could pick Daniel up from College Park before rush hour. I posted a review of Deep Space Nine's "'Til Death Do Us Part", cropped some pictures so I could frame them, and cleaned out a bunch of clothes to give away (is it worth putting a Lilly Pulitzer blouse I got ridiculously cheap on eBay)?

After we picked up son, we had dinner with my parents -- Greek food, yum -- and came home for two episodes of Shakespeare Uncovered, Morgan Freeman on The Taming of the Shrew (talk about a problem play) and David Harewood on Othello (as one of the commentators said, the play where you most want to jump out of your seat and make the main character stop what he's doing). Here are my cats enjoying the winter doing what cats do best: 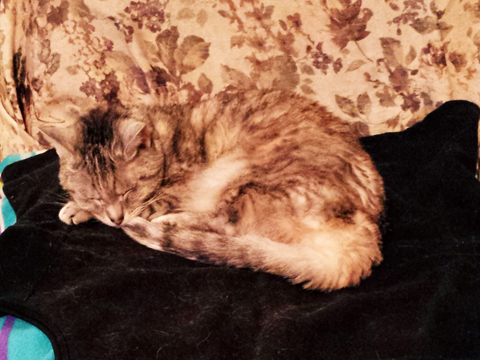