I had a quiet morning reading and catching up on email. When eventually Daniel woke up, we had him drive us to Sugarloaf Mountain, though we stopped on a rural road to make a phone call because the car's maintenance light came on -- Toyota assures us that it's because we're over the requisite number of miles for an oil change and we'll be fine for another couple of days. So son drove us up to the mountain parking lots, where we walked to some of the overlooks, though we did not hike to the summit because we were all chilly and there wasn't anything growing this time of year! 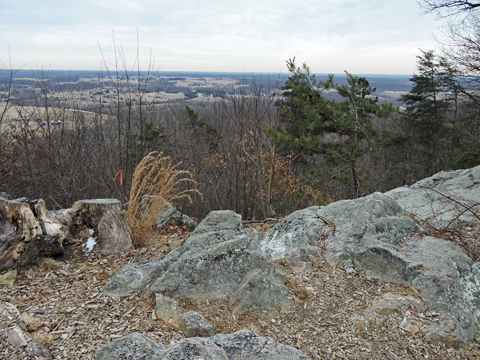 In the evening we took Daniel back to College Park, then watched two movies new to cable, Edge of Tomorrow and Draft Day. They're both serious Guy Movies; neither one passes the Bechdel Test, and they're entirely about the main dude and what he wants and what he can do and how great he ends up being for everyone around him, plus Cruise and Costner are basically playing the characters they play best, though in both cases they have to send their hero personas up a bit before they hit their typical stride. But I enjoyed them anyway, because aliens and football!
Collapse