It was a bleak, cold day, which started with wintery precipitation and ended with cats refusing to leave their blankets to keep us company. Paul worked from home since we had to take the car in for service, something we discovered would be necessary last weekend when the warning light came on, and my only major expedition out was to drop him off to retrieve it, though we also saw bunnies and a deer while walking near twilight under a beautiful cloudy pink sky. And we watched Newsies, which for some reason I had never seen before -- I don't know why I thought it wouldn't be that good, but it's a pro-union, anti-big media Disney musical with Christian Bale singing and dancing! What is not to love!

Tuesday is a busy TV night, though it was a total downer because we'd already heard the news about Jon Stewart retiring from The Daily Show before it started. I don't know how I am going to get through the next election season without him and with a likely-very-different Colbert. Plus I read an atrocious warning about Kingsman involving dead animals which means Colin Firth won't be enough reason for me to sit through the movie. The Flash had bad sex, Agent Carter had bad comic book violence, Forever was probably fine but I was already cranky from the other two so the plot-trigger corpse did not improve my mood. Here are a couple of photos of Lewis Orchard closed for the winter: 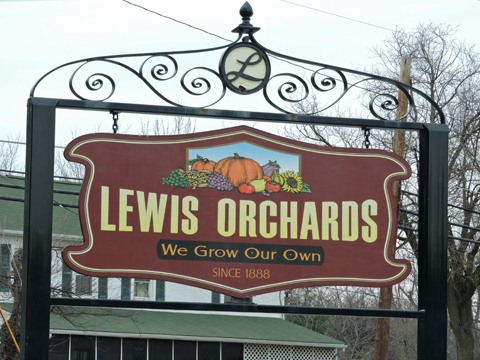