Another quickie because I spent Monday with Cheryl, though we didn't get started any earlier than we do when she drives up here because we slept late after staying up watching most of Jimmy Kimmel's post-Oscars coverage -- did Matt Damon actually appear, for a change? We woke up in the mood to watch the 1998 Les Miserables (a.k.a. the Neeson/Rush Les Mis), though I was horrified to discover that my DVD apparently has a flaw and two scenes must be completely skipped (a.k.a. I have to buy a new one). That film makes massive, problematic changes to Hugo's novel, but a really strong Cosette and some really glee-inducing Javert moments that are well worth seeing.

We were going to try the new crepe place in the mall but were distressed to find that it's not open yet! So we got Blaze Pizza and came back to watch The Grand Budapest Hotel, which Cheryl had not seen (and I think should unquestionably have won Best Original Screenplay on top of the four design awards it did win, though Boyhood would have been acceptable). Paul came home just as we started watching The Jane Austen Book Club, which is a little flick-chick-y for my taste but has a good cast, and some Shoujo Cosette before Cheryl had to leave. I loved the Sleepy Hollow-in-early-America season finale though I'm very bummed it's over for now. Look, snow bunnies! 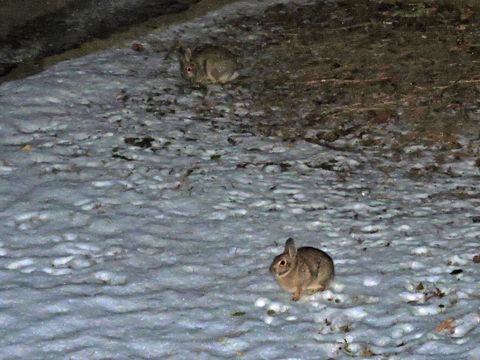