I spent what was, for me, a lovely Monday with Cheryl, though due to an ongoing family emergency it was probably not as lovely a day for her, unfortunately! We went out and got Indian food to bring home, then ate it while -- because we wanted something happy and mindless -- we watched Amy Adams and Matthew Goode in Leap Year (in which they and Ireland are very attractive, and don't ask about the plot). After that, we watched the superbly acted and filmed, kind of oddly-scripted at times Mr. Turner (how did Bradley Cooper get a nomination and not Timothy Spall?). I wish the women in his life had been characterized in more detail, but it's worth watching anyway.

Then, despite our ambivalence based on many mixed reviews, we went to see Kingsman. To keep my blood pressure down, I purposefully avoided thinking about the racial and gender politics, and I watched the violence by pretending things like everyone in the church scene was a hologram. If you can shut your brain off to that degree, Colin Firth looks very fine in a suit and has lovely chemistry with both Mark Strong and Taron Egerton (what, you thought any of the women had a substantial enough part for a romance?). Comcast was down in the evening so we are still behind on Madam Secretary and OUAT. Ducks at the National Geographic Museum a couple of weeks ago: 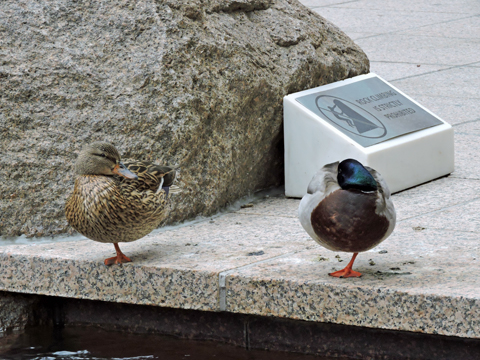