I had to get up and out early on Tuesday for routine blood tests, meaning dealing with the parking lot on an empty stomach and driving back home feeling slightly woozy. Plus tomorrow I have more routine doctor stuff (yes, I put it all off till we got back from France). Apart from that, I had a nice Tuesday: did some shopping, met my father for lunch at Blaze Pizza, saw the Easter Bunny at the mall. We have eight daffodils coming up where we only had one last year, and they're all about to open!

We are so behind on our TV shows that for the most part we've decided just to jump back in instead of trying to catch up. So we watched The Flash (obviously missed a bunch but we could figure out where they were going and OMG Mark Hamill), Agents of SHIELD (wow Skye is the Hulk AND Katara!), and Forever (which we did catch up on because Henry is awesome). Here are some of the lovely spring-y orchid pics from Hillwood's greenhouse, which we saw last Sunday: 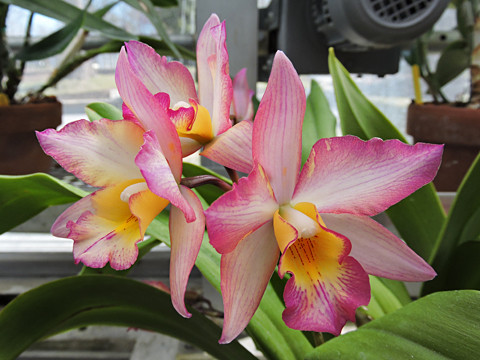