Quickie because we are still recovering from the Terrapin women's painful loss to UConn in the Final Four -- I didn't really expect them to win, but it would have been nice to lose by fewer points. In general we had a College Park-focused day; we had vague plans maybe to go to Mount Vernon or Frying Pan Farm Park after dropping our kids back off at school, but they slept late and we had a big lunch and got stuck in traffic and went food shopping so Daniel doesn't starve next week, and by the time we left them at their respective residences, it was after 4 p.m.

Since I was feeling deprived of the baby animals we'd been hoping to see at the Virginia farms, we went to the UMCP campus farm, where the animals were being brought inside for the evening but we got a glimpse of a foal and several lambs. Then we came home, took a walk to see flowers and bunnies in our neighborhood, ate dinner, watched Notre Dame beat South Carolina in a really great game, then skipped Madam Secretary and the US premiere of Wolf Hall to watch Maryland fall apart completely in the second half. Snaps of the farm and flowers on campus: 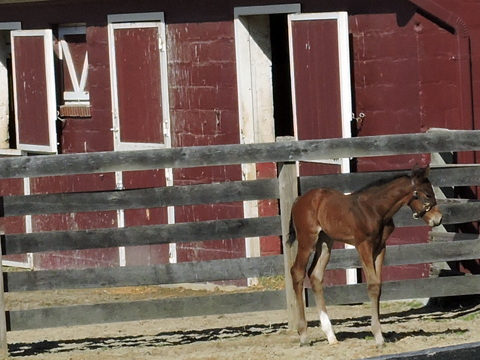