I spent another beautiful spring day with Cheryl and Paul, who got up very early so he could work half a day so that late in the morning we could go downtown to see the cherry blossoms that are peaking in bloom right now around the Tidal Basin. We had a minor crisis when the parking lot refused to honor the parking reservation we'd made online, but another parking lot offered the same price, so we parked beneath L'Enfant Plaza and walked past the Department of Agriculture to the water. There were weekend-sized crowds despite it being a weekday, but the weather was perfect and we got to visit Thomas Jefferson, George Mason, Franklin Roosevelt, and MLK at their memorials. We ate lunch at the picnic tables near the park service building and bought this year's cherry blossom pin and magnet in the Jefferson Memorial shop. 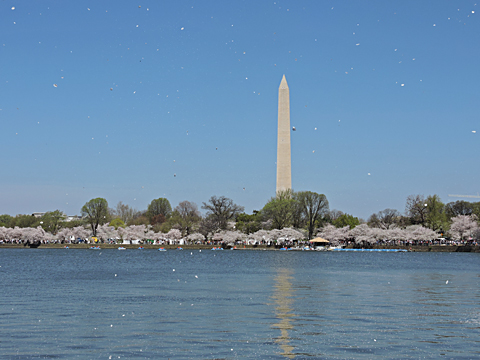 We had thought about going to Riverbend Park in the mid-afternoon to see the bluebells, but Annmarie and Cindy, whom we'd planned to try to meet, were tired from a morning at Great Falls, the bluebells were reportedly only about 30 percent flowering, and we were a little sun-dazed, so rather than fighting rush hour traffic, we came home and watched Sharpe's Mission and Sharpe's Revenge (we were in a Sean Bean mood after a late-night viewing of GoldenEye the night before). Plus we watched some Shoujo Cosette, including "Javert's Justice," the episode in which Javert is nearly derailed but since this is the Japanese kids' version of the story, many things end up much more happily than they do in the book and most adaptations of Les Mis! After Cheryl had to go home, Paul and I caught up on Madam Secretary and the terrible O's game.
Collapse