We started Monday with flood warnings, spent lunchtime with tornado warnings, and ended the day with thunderstorm warnings, but although we got some hard rain and a few minutes of lightning and thunder, thankfully the funnel clouds and hail never materialized. Still, we stayed close to home. Paul worked here because Comcast was coming to pick up the equipment we were returning since we now have Verizon, and having heard bad stories about them, he wanted to be here to see it done, and I had a bunch of work and the twice-yearly closet rearranging needed to get to my spring clothes plus a bit of skirt hem repair.

When we went for a walk, we saw three bunnies who were not in the least concerned about the previous or coming storm, though the squirrels and wrens were quite active. Paul, who grew up in Boston, decided that we should celebrate Patriot's Day properly, so he made Boston baked beans, (faux) beef stew, and Boston brown bread for dinner. Meanwhile, I watched the Jurassic World trailer enough times to convince Paul and Cheryl that we needed to watch The Lost World (we saw Jurassic Park a couple of weeks ago and plan to get to Jurassic Park III before the new movie. Riverbend bluebells: 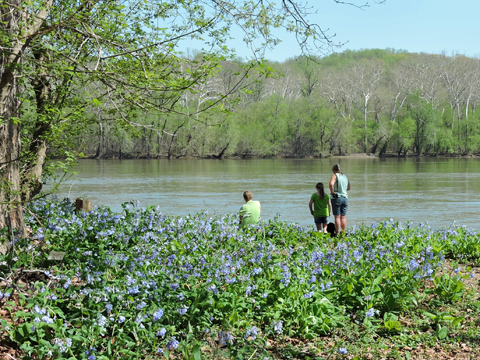