Cheryl and I decided that we really needed to see The Water Diviner together on the big screen, so I made her come visit on Monday and we had a perfectly wonderful self-indulgent day. We went to the mall and had Indian food, then went to the movie at the new Arclight theaters which I hadn't been to yet (they are beautiful and I love the ability to reserve seats). The movie is beautifully filmed and acted, very sad in parts but not depressing, perhaps a bit predictable in the structuring of the screenplay, but considering how little Americans know about Gallipoli I don't think that was a bad choice (and the "where is the Armenian genocide?" complaints are like complaining that there's no mention of incarcerated Japanese-Americans in movies about D-Day; The Water Diviner is about how people do terrible things during wartime, it doesn't have time to cover all the terrible things that happened during the war). It's one of my favorite Crowe performances. I wish the female characters were better fleshed out but I like Kurylenko too.

When we left the movie we thought about getting frozen yogurt, then decided we'd rather have chocolate malteds, so we went to Baskin Robbins. Back at my house, we watched a movie called Butter because Hugh Jackman was in it, which I must advise Hugh Jackman fans is not a good enough reason to watch it (I mean, his is one of the less embarrassing performances and he only had a couple of completely cringe-worthy lines that were supposed to be parodies of racism/sexism but instead came off as racist/sexist and I even felt sorry for right-wing Republicans being badly mocked by this film, but he isn't in the movie for nearly long enough to make up for the awful script). We took a quick walk to see bunnies and found a baby bunny on my cul-de-sac I hadn't even known was there before, then we came back and watched Sharpe's Justice. Paul and I spent the evening catching up on The Flash and Once Upon a Time after looking for more bunnies. Here are some of the tulips we saw with Annmarie by the Smithsonian on Sunday: 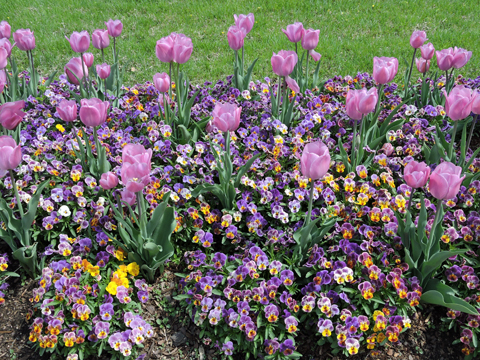