My Tuesday was about work and chores, with breaks for azaleas and bunnies (we found another baby bunny lurking in a different bush in our neighborhood)! Last week was crazy, but the rest of May looks to be nearly as much so. We had meatless tacos for dinner because even if Cinco de Mayo is primarily an appropriated excuse for a big drinking festival, I get in the mood for Mexican food after all the mentions of it.

I liked The Flash, which I think almost passed the Bechdel test this week, and I'll give Agents of SHIELD a pass because it actually did pass, even though the Super Special Snowflakeness of Skye was the focus of the story. Forever's season ended on a very nice note, a perfect jumping-off point for fan fiction because it's probably the last-ever episode. Some photos from Brighton Dam's azalea garden on Sunday: 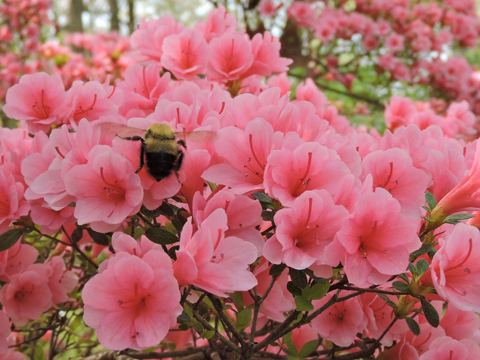