My Tuesday was...well, pretty much a repeat of Monday, only with more Science Bros. and fewer bunnies (I imagine that the bunnies were there, but it was hotter and muggier and apparently they preferred not to be out in the sun). Plus there was more horrifying news from Nepal and whatever happened with that train in Philadelphia, which the news is reporting with no facts. I took a walk in the woods in hope of seeing deer, but instead I saw tent caterpillar nests. I have no photos of caterpillars yet since they haven't hatched, but here are some of the inhabitants of Lewis Ginter Botanical Garden's Butterflies Live! 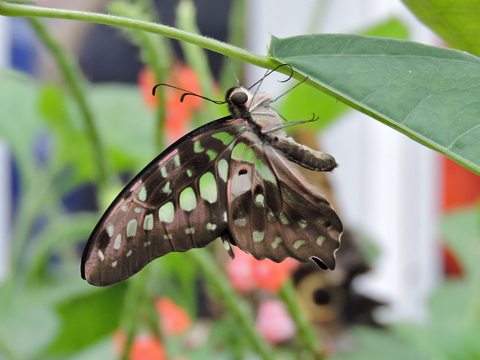 The Flash began on a promising note, with Iris actually getting to do things before her boyfriend, her wannabe boyfriend, and her father all reduced her to making her decisions for her again so that three white superheroes could go fight a rather more diverse group of villains. Agents of SHIELD looked like it had a few cool things going on in its season finale (though I'm always wary when a man is redeemed on the grounds that his woman is crazy), but our second half was repeatedly interrupted by the news to tell us that they didn't have details about the train derailment but look, grainy dark footage!
Collapse